When does the student loan debt strike start?


I asked that question a few short hours or long minutes ago. For some it has already begun. There are anecdotal claims that a third of student loans are currently in default; other sources say 17%, or 7 million. There must be an equation that the feds and private loan sharks have devised to calculate risks, costs, and recovery rates. Here are some tedious definitions, statistics, and forecasts for those who choose to wade through them. Numerous people involved in ForgiveStudentLoanDebt.com (now apparently called StudentDebtCrisis.org) claim to have withheld payment from 5 to more than 20 years. Vice is perpetuating the idea that moving abroad - seemingly to Europe then perhaps to South America - and defaulting on loans is a relatively safe bet and good idea because the loan sharks are focusing on deploying collection agencies on defaulters in the US, who they can more easily track and efficiently penalize. Arguments have been made that countries who refuse to allow US student loan collection entities to harass their residents would gain well-educated, spirited US ex-pats who would enrich their culture.

While the keyboard is hot and the mind is sharp, "I want to live on the abstract plane" and take an aerial view. Perhaps an economist like Doug Henwood or Richard D. Wolff will give us some market-based insights later. For now, I'll tell you intuitively what I think could happen. If 1/3 of student loans are indeed currently in default, then 2/3 are being paid regularly, irregularly, are in deferment, are in forbearance, or are in some other state-sanctioned state of flux that excludes them as being classified as in default. If .5-1/3 of the 2/3 of ostensibly non-defaulted student debtors actively making payments were to suddenly, simultaneously halt student loan payments for 6 to 12 months, it would prompt at least some concessions to our collective demands and at best a collapse of what everyone knows and recognizes as the latest version of the housing bubble and another formation of the dot-com bubble. We know this; we watched it happen. Investments were made, the returns were much lower than expected, growth stopped or declined, the market crashed, the bubbles burst (why such a happy image of bubbles for such a ruinous phenomena?). Fine. The market fails. But it didn't crash and burn. And we didn't get any concessions. Why? No demands. Why? A lack of organized strategy around foreclosures, bankruptcies, and the stalling/failing/sinking of startups.


There are a bunch of "immediate defaulters" (i.e. "starting-gunners") for lack of a more precise, less connotatively pejorative term. Immediate defaulters are likely already factored into the equation that the loan sharks have inevitably always already constructed. That means the interest rates, punitive repercussions, and other strategies to force payment from statistically "reliable" debtors are already built into the system. Interest rates may be higher to compensate loan sharks for what they bet on losing from their profit margins to immediate defaulters. Penalties for defaulting once you start paying, such as garnishment of wages and seizing of homes; ruining of credit lines necessary to buy homes; paying for medical care; and affording transportation in areas where public transit infrastructure is so disjointed and underfunded that having, maintaining, insuring, registering, licensing, fueling, and storing a car is the most efficient/only practical means of going places to earn money to pay for the education that allowed you to be considered for a job to begin with, as well as to the places you spend money because you need goods and services, are more directly threatening than those to the starting-gunners who've never paid at all. Personally, I owe more than $150k in student loan debt, primarily due to borrowing as an uninformed and displaced teen, subsequently as an uninformed, disillusioned 19- to 21-year-old MA student, and finally as a slightly informed, defiant twenty-something PhD student.

My presumptions about (premeditated, conscious) immediate defaulters (I always assumed I'd be one, and I only know three well) run along the lines of: Merchants who have already paid off their business loans and don't report their earnings accurately to the Tax Man who doesn't look too closely at the perpetuator of the US myth of the hardworking, successful, albeit a bit rebellious, independent entrepreneur; wealthy people who hide behind smokescreens of marriage, attorneys, reproductive expenses, and other state institutions because they continue to reproduce the Center, the labor force, the nuclear family; the working class who are accustomed to hiding from the government's attempts to garnish their wages and seize their personal property and even their bodies; the working class who are incapable of navigating the labyrinthine process required to establish an accepted payment plan to keep the wolves from the door and can't afford an attorney or are not wired to pursue and engage with bureaucracy; craftspeople, artisans, artists, and small merchants who sell things in online stores and local markets and street fairs and don't report the income; and those who simply don't care about consequences or aren't aware of exactly how dire they could be (we might say they have nothing to lose but their chains, but I'll not wax idealistic at this hour.).

These cowboys, these cavalier people who haven't paid a dime in ages/ever are to be admired. By me, anyway. I've paid thousands and the loan balance never decreases. You know why. Interest rates. Economic curves. Income-based repayment. You're out of a job precarious person? Ah, well, we won't evict you, steal your unemployment check, and take your car, but we will capitalize the interest that accrued while you used one of the (is it still three?) trump cards of failure that you're allowed as a student loan debt slave. In fact, use all of those cards because then the threats become imminent. You're educated, you have what we know you think we think is earning/producing potential, and you have what we know you think we think is an ethical and moral obligation to pay back money you borrowed from us, you hippie. Why were you taking out loans at age 16 anyway, dropout loser? (That's Doctor Dropout Loser, to you.) It's a credible threat because we assume you're well-traveled and well-read, that you want to maintain your US citizenship and probably live here, and if not here then in a Western or Eurocentric nation with which we have a robust collections agreement. By the way, despite Vice's often tenuous claims, the last time I checked a few years ago, the only place student loan debt collectors cannot follow one is to Cuba (probably on its way off the list if it has not already conceded to US interests, pun intended), Iran, and North Korea. Pretty bleak options any way you slice it, even for my Maoist readers and comrades.

But these cowboys are not alleviating any problems. Renegades are badasses. I love them. One of the top 10 most memorable things anyone has ever said to me was, "Okay, but where are you going to meet another partner who supports the FARC?" Though the nuance of my position was lost on them - as my nuances and all nuances so frequently are lost - the underlying implication of their point is valid. Renegades, rebels, radical fronts, and spontaneous disrupters are badasses. They lay it all on the line. That is admirable, something I wish I were more like. But here are the 2/3 of us, paying our monthly alimony to the spouse we supported for so long that we must now pay to sustain the lifestyle to which they have become accustomed and paying child support if we had someone we value co-sign, like our elderly parents, our established older siblings, our recently deceased grandparents, et al., or we'll lose custody. Luckily I declined the co-signing option, and unluckily they were throwing tens of thousands of dollars at me per semester. TENS OF THOUSANDS PER SEMESTER. In the US, a semester is something like four months. Then there are the couple of summer terms. So I could have gotten $30k for the fall and spring semesters, plus more for summer terms, at any given time. Often I did opt for the maximum amount. When I started college part-time at 14, I paid tuition with money from my fast food job. Once enrolled full-time at 17, I worked a lot and took mid-range loans (say $8k a semester, probably $4k all summer) and lived with roommates. But the further I went down the academic path, the more serious debt sums I racked up. 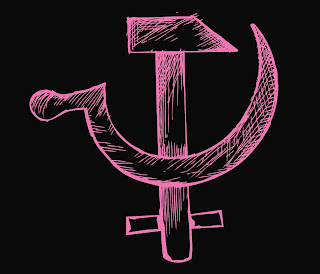 The Rest of Us


Then there are those of us who intend to pay, have paid what and when we can, and are able to nimbly navigate nightmarish bureaucratic  mazes to enroll in state-sanctioned payment plans as the loan sharks sponge all of our expendable income. It seems we're on our own, but we are many, we are everywhere, we are millions. And this is not to dismiss offhand the courage/ignorance/lack of bureaucratic navigation skills of immediate defaulters. It is to simply state that some of us are wired to Follow the Rules and read tedious wording, qualifications, options, caveats and legalese, which has (as much as I hate to give the Obama administration credit for anything but war crimes and bolstering of the surveillance state) become more manageable for the economic layperson. It's markedly easier to identify, compare, and select from several limited but at long last comprehensible repayment options.

Communists think collectively. How can we movement build? How can we alleviate suffering? How can we unify as a class? Even while people in other places under other conditions may be suffering more intensely and in different ways, there is always a fight within our own ring, there is always someone to get on the ropes, there is always a stand to take. And this one looks ripe for the taking. Let's assume the cowboy renegades are not having any of our silly ideas about mass movements, unity of struggle, and other people's problems. We'll be dismissed as some kind of privileged opportunists and petit bourgeois whiners by our liberal social justice acquaintances and leftcom and third-worldists comrades, respectively. We should be grateful we even got to go to college, the first might say. Our futile attempts to jab capital's jaw is an impotent waste of time and energy, the second might say. There is only one class that can start the Thing that ends the Thing that causes suffering, the third might say. Then again, I don't know what anyone will say. Nor do I particularly care. I'm playing fast and loose with my BAMF style, structure, and typical approach right now because I want to get this message to you now.

Don't look to the starting-gunners, don't place your bets on government loan forgiveness under Bernie or anyone else. Look to the millions of people around you who are in eerily similar situations revolving around this singular present-day matter that is so deeply entwined with the financial sector and the state. Ask them how they feel about and what they would do to overturn student loan debt. Look inside and ask yourself what you're honestly willing to actually do about it. What are our demands? The US is begging for a general student loan debt strike (perhaps a general debt strike). You think about it, I'll sleep on it, and always feel free to comment below with your thoughts. Let's see what kind of organizational strategies can be deployed/would work the most effectively to achieve such a feat, for we need a mass movement to tackle such a massive plague. No amount of restless late night thinking and keyboard clacking from me can replace that.
Posted by Unknown at 9:09 PM